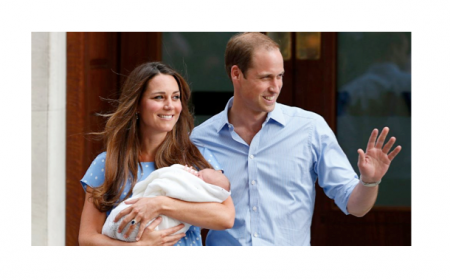 For Unto Us A Heir Is Born

“There is one thing higher than Royalty and that is religion, which causes us to leave the world, and seek God.” − Queen Elizabeth I

Phew! At last the long wait is over. The baby is here. The Duchess of Cambridge has given birth to a baby boy, Kensington Palace has announced.

“The Queen, The Duke of Edinburgh, The Prince of Wales, The Duchess of Cornwall, Prince Harry and members of both families have been informed and are delighted with the news,” it said.

Now, not only the wait for the birth of the baby is over but also its name − and his name shall be called  George Alexander Louis, heir to the British throne.

This will be the third great-grandchild for Queen Elizabeth II whose reign is currently the second-longest of any British monarch.

The queen’s first two great-grand children are the offspring of Peter Phillips, the son of Princess Anne, the second of the queen’s four children.

The public’s fascination with British Royalty is one that is seamless, and each time an heir is produced it perpetuates further interest and fervor in the British Monarchy.

It was only two years ago that Catherine Middleton officially became the “Duchess of Cambridge” when she exchanged vows with Prince William at Westminster Abbey. The event was marked with pomp and pageantry as millions of people worldwide watched.

PBS reported then, “…although coverage of this royal wedding, especially in the British media, focuses on Kate Middleton’s family lineage of three generations of coal miners, the great-great-great-great-grand mother that really counts is Queen Victoria, who reigned from 1837 to 1901. She and her German consort, Prince Albert of Saxe-Coburg and Gotha, produced nine children, and the consequences rippled through the tumultuous history of Europe well into modern times. Indeed, dynastic marriages and arrangements, so symbolic of an old Europe, were at the heart of a conflict that brought about its end − World War I from 1914 to 1918. Three of the major warring nations − Britain, Germany and Russia − were ruled by two grandsons and a grandson-in-law of Queen Victoria. By war’s end, only the British Monarchy would remain.”

British kings and queens throughout the centuries have played an incredible role in world history. The impact and influence of their actions still remain a legacy in various parts of the world.

Today, monarchists and royalty watchers have claimed that the lineage of the British Monarchy can be traced to that of King David − an old testament king of Israel in the Bible. This assertion has triggered controversies as well as added further intrigue and interest to the story of British Royalty.

Now as little baby George enters the world, he will soon learn that there is a tremendous amount of responsibility in being a member of the royal family.

For him, ascending the throne would mean head of state of 16 countries including Britain, Australia, and Canada, Supreme Governor of the Church of England, head of the commonwealth which covers 54 nations, and head of the British armed forces.

At the same time, it is interesting to note, if or by the time George Alexander Louis ascends the throne not many people alive today will be able to watch his coronation as by then they would have made their transition to another world.