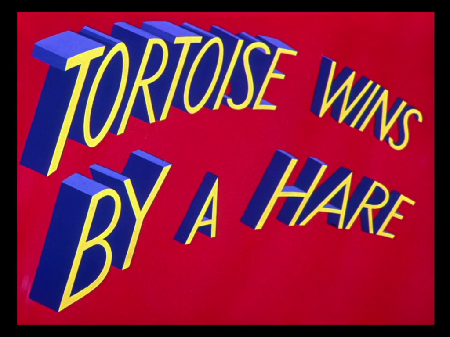 Billed as Flash and dash Versus Slow and steady The hare had never accepted the result of the race. He thought the tortoise’s win was absurd and should be accorded an asterisk to signal to all reasonable men that an anomaly was allowed to become the standard.

No self-respecting person could or should accept that outcome.

Giddy with excitement for the clash of these titans, I overcame my aversion to gambling and wagered a lot. Alas (sigh), I lost. Not much if everything you have is not much. Indeed, the race is etched forever in my memory, not so much for Tortoise’s win but for Hare’s failure to properly consider the confidence by a landslide we had reposed in him. Some of my neighbors have not recovered.

In the aftermath of the devastation, it triggered a depression there was an inquiry. The hare took the stand and was most contrite though he was still at a loss as to where the race was lost. Someone suggested he threw the race.

However, the hare was indignant leaping; from his seat in a single bound and was across the room, inches from the provocateur’s neck. It took four burly men to restrain him.

Calm was restored, the inquiry continued, or more correctly, waited on Tortoise who took forever to mount the stairs. His time in the witness box was less colorful, even underwhelming. To every question he replied, “I did what I came to do”. He might as well have pleaded the Fifth. However he extended an olive branch to the hare. Be proposed a rematch if it would redeem the hare’s claim to fame.

Oh, that was not a buzz, ‘twas was pandemonium! Instantly it threw a moribund economy in to high gear even as the lead commissioner of the inquiry knocked his gravel and pleaded for order.

The race was on.

The hare began to train under the supervision of a renowned coach. The crowds at his training grounds were large. I bought a binocular on credit. Through its lens I watched the hare train, saw the hunger to right a wrong, felt his explosive talent stir the crowd. It was declared, right then and there, that if the hare brought one tenth his A game, the great stain on the history of races would be no more.

We have much to thank the tortoise for. For too long we have had to endure a result that even diplomats cannot see through.

On the morning of the race, I stepped up to the bookmaker with some trepidation. The tortoise had done a few laps in training. Well, it was alleged, for not many had stayed, if any did, to see him make his rounds. Still no fan of gambling, nor an advocate for any game of chance, from the unsettled past i wrestled with my experience of loss. It was time to wager.

I could watch the race from the sidelines, still wounded at the knee from the unimaginable loss I suffered, when the hare misjudged a turn. I could be the punter who has not healed, still scared and scarred from the improbable and incongruous that came to pass. Or be willing to let this anomaly be corrected and not give my answer to this great question after the fact.

The hare was rearing to go even as the tortoise lumbered to the starters mark with snail and slug riding shotgun on his back. To groans and laughter he made his way to the starting line. I hurried to place my wager.

I bundled all I had and pushed it towards the bookmaker and told him my choice for the winner’s circle. With a look of incredulity he asked if I were a mad man.

A hush descended as the crowd paused to see who had lost or was going to lose all his marbles. The silence was deafening. I cleared my throat and with a steady voice I repeated my wager, naming my favorite by a considerable lot. The gasp of the crowd was disconcerting.

Heads turned at my confidence. Some deemed it impertinence.

The starter’s gun sounded and the hare was off in a cloud of dust. The tortoise brought up the rear with the burden of the snail and slug hanging on for dear life. Unaccustomed to such speed they could be forgiven for the markers they made on tortoise’s shell.

Before long, well it was after some time, a shout was made for a contestant was making the long trek towards home. I was already on my feet shouting encouragement.  Sometimes winning means redemption, sometimes it is bragging rights and crowing of ‘ I told you so’. A gut feeling about a complex train of events going a certain way, or a more intimate understanding of talents and desires and being incomplete until a certain desire is attained. And sometimes it is a claw or paw exposing a flaw.

It felt like history was being made for the first time. To me it was. I was elated. Not because I had won my wager or picked the winner. Far from it. I had found an immeasurable sense of validation that hitherto buying the binocular I had not even wondered about.

Which reminds me, I have to make good on the promise to honor the faith placed in me by the man who sold me the binocular on credit. Who knew an empty wallet could be so intoxicatingly empowering?