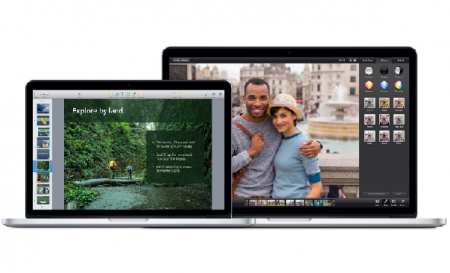 Although it was the end of year 2013, it did not stop Apple from launching a new product. The latest version of Apple’s high end professional notebook was launched recently which is now being considered as one of the most powerful notebooks ever. The late 2013 version of MacBook Pro is a perfect blend of style, class and performance. The new MacBook Pro comes with a 15 inch retina display and is available in two models; having different specifications. However, the Nvidia GPU GeForce GT 750M, Intel Iris Pro 5200 Graphics and DDR3L SDRAM are found common in both the models.

As far as the design of the new MacBook Pro is concerned, it is almost identical to its predecessor. On the right side of the notebook, a USB 3.0 Port, a full size SD Card slot and an HDMI-out can be found. Whereas on the left size, MagSafe 2 charging port, a 3.5 mm headphone jack, two thunderbolt 2 inputs, two microphone holes and another USB 3.0 port rests. One of the biggest attractions given in the notebook is that of the retina display which has over 5 million pixels with a 2880 x 1800 pixel panel. A screen having 220 pixels per inch is definitely something which looks amazingly attractive to the eye. The speakers of the notebook rest on either side of the keyboard, and have an improved sound quality as compared to the 13 inch model. The internal storage space allocated is 256GB, which can be enhanced up to 1TB on the buyer’s request.

The new silicon used by Apple is yet another highlight of the new MacBook Pro with 15-inch retina display. The new premium chip, Crystalwell, is powered with Iris Pro Graphics. Out of the two models available, one comes with a 2GHz Intel Core i7 processor while the other model, which is slightly more expensive, comes with a 2.3GHz processor. Both the models can be easily upgraded at the time of purchase. The 2.3GHz processor can be upgraded to 2.6GHz. Therefore the 2.6GHZ fourth generation quad core i7 processor with 6MB of L3 cache memory and 3.8GHz of Turbo Boost makes MacBook Pro extremely advanced, powerful and definitely the best notebook for all sorts of complex tasks. The combination of such a powerful processor and a sharp display provides an extraordinary gaming experience as well. Moreover, the latest MacBook Pro gives a brand new meaning to video editing,  viewing pictures, watching movies, and even browsing the internet because of the high resolution display.

As a conclusion, it can be said that the Intel Iris Pro graphics has improved the performance of the new MacBook Pro as compared to all the previous models. Secondly, the 15-inch MacBook Pro comes with a 1080p HD screen providing an amazing experience. Thirdly, the Thunderbolt 2 is one of the most attractive interface upgrades and when it accompanies with the 256GB of speedy flash memory, 8GB of RAM, an improved 2.6GHz processor and 6MB of cache memory, the new MacBook Pro a very powerful machine. And to top it all, the 8 hour battery backup makes the new MacBook Pro the best notebook money can buy.