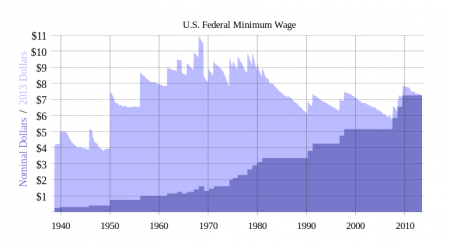 In 2005, Jimmy McMillan founded the Rent Is Too Damn High Party. The central tenet of his party platform is that the rent in the city of New York is too high and unaffordable for most New Yorkers.

Today, this is no different from what President Obama is saying with regard to the minimum wage. “No one who works full-time in America should have to live in poverty,” said the president.

The fact of the matter is – the minimum wage is too damn low. Although some of the captains of industry and officials would rather hide from or ignore this issue, the president has brought it to the fore and rightly so.

Right now, a full-time minimum wage worker makes $14,500 a year – this leaves a family of four below the poverty line.

Therefore, the president call on Congress to raise the Federal minimum wage for working Americans in stages to $9 in 2015 and index it to inflation thereafter is one that is not only timely but also warranted.

The last time the federal government mandated a nationwide minimum wage was in 2009 at which time, the rate was set at a level of $7.25 per hour.

Although some states and municipalities have set their minimum wage levels higher than the federal level, the truth is, the stipulated rate prevails in most states.

Now, four years later, minimum wage earners are still earning the same pay amidst the erosion of their income by inflation and super profits by some of these same companies for which they continue to work.

If the call by President Obama to raise the minimum wage is heeded by Congress, it would:

1) Increase workers productivity and by extension contribute a stronger economy

2) Provide a greater level of income for the household

7) Improve morale within the company

Notwithstanding the foregoing, ultimately, it is the low-wage earners who must act and continue to advocate for changes. The demonstration recently was an important first step in the right direction.

However, it should not stop there as they should now collectively seek the support of their elected representatives in Congress to make the changes that are necessary to enable them to enjoy livable wages.