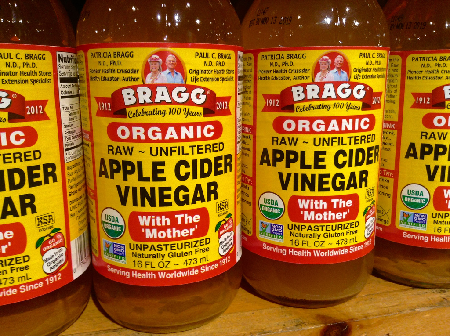 For most women who love to explore, apple cider vinegar is a must-have in the kitchen. Not only does it seem to add a perfect taste to several home-made recipes, but many people swear by its cleansing powers. And that’s not all, according to dietician and nutritionist Jenelle Solomon, who, like many other experts, has touted the acidic liquid as a multipurpose magic potion.

“Organic apple cider vinegar has been used for many years as a folk medicine with many benefits. In recent times research findings have supported claims — from its ability to lower and stabilize the blood sugar levels to whitening teeth, and more recently to losing weight,” Solomon said.

Perhaps one of the most popular natural remedies, Solomon said that apple cider vinegar contains powerful healing compounds such as potassium, magnesium, acetic acid, probiotics and enzymes, each being essential to various functions of the body.

“Perhaps least known on the list, but very important and beneficial is acetic acid. It is a natural antibiotic (like garlic) and also a very good source of polyphenols (the same compounds found in dark chocolate and flaxseed which make them good for health) which help to protect against cancer, cardiovascular disease, and a few other lifestyle diseases,” Solomon said.

The benefits, Solomon said, are numerous, and include the following:

1. Can be used to whiten teeth owing to its pH (about 3-5). A natural whitener when used on the teeth, it is said to have the capability to remove stains or layers of plaque which will result in whiter teeth.

2. Helps to detox the body. Not only does it clean the intestines, but in its raw state, it is considered a liver lymphatic tonic which contributes to overall body cleansing. It also helps to balance the body’s pH as it cleanses and improves skin tone.

3. It helps with heartburn and acid reflux primarily caused by the pH of the stomach being imbalanced or “out of whack”. Apple cider vinegar not only helps to balance the body’s pH but is rich in probiotics and enzymes.

4. Food preservative. Not only is it used to rid foods of bacteria that may be sitting on the surface, but it is also used to preserve meat.

5. Lowers and stabilizes blood sugar levels. It’s touted by several researchers as having a similar benefit in diabetic patients as many medications. It inhibits the digestion of some starches which would otherwise raise the blood sugar levels when digested.

6. Beauty product. From the hair to the skin, apple cider vinegar has not only been used to clear warts, acne, and even skin tones but has also been used to treat dandruff.

7. Increasingly people have vouched for its ability to burn excess fat. People have been replacing lemon and lime in their water with apple cider vinegar or having it with their meals so that it will cancel out the carbohydrates. Some research even suggests that apple cider vinegar stimulates some genes which help to burn fat.