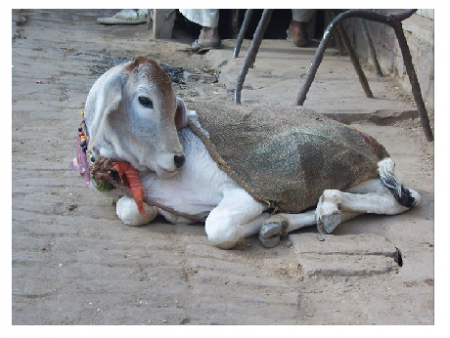 India is a country that consists of 1.2 billion people and comprises of 80% Hindus. Here, cows are revered, and any slaughter of this animal in some states could land one in jail for years, and attract a fine.

The Maharashtra Animal Preservation Act, 1976, for example, governs the slaughter of cattle in the state.

The act which was amended in early March now forbids not only the slaughter of cows but also prohibits the sale and export of beef.

Under the act, the slaughter of cows includes killing a heifer or male or female calf of a cow. This action is prohibited, and a violation of the law attracts punishment of a 5-year jail term and an INR10,000 fine for possession or sale.

The first case of violation, registered under the beef ban law in Maharashtra, has received an extensive circulated press report.

According to indiatimes.com, two persons have been arrested by police in Malegoan for allegedly slaughtering calves.

A case was also registered against three persons, and two of them were tracked down and arrested.

Indiatimes.com reported that the ban had been challenged in court by traders who say tens of thousands of people involved in the trade have lost their livelihoods.

It also reported that the ban had triggered protests from some political and cultural quarters, arguing that it amounted to encroachment on individual choices and food habits of large sections of people, especially minority communities.

However, the state government has not yielded its position, citing the national movement, which was backed by Mahatma Gandhi in the total ban on cow slaughter.

In December 1927, Gandhi reportedly stated, “As for me, not even to win Swaraj, will I renounce my principle of cow protection.”

The cow was venerated by Gandhi, who reportedly said: “I worship it and I shall defend its worship against the whole world,” and that, “The central fact of Hinduism is cow protection.”

He is also said to have regarded the cow better than an earthly mother, and called the cow “the mother to millions of Indian mankind.” Gandhi reportedly said, “Our mother, when she dies, means expenses of burial or cremation. Mother cow is as useful dead as when she is alive. We can make use of every part of her body – her flesh, her bones, her intestines, her horns, and her skin.”