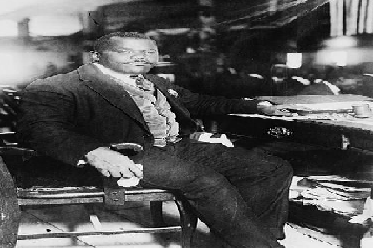 Oh children, listen, and you shall hear
Of the struggle of a man’s life and his career
Marcus Mosiah Garvey was his name
Born in Saint Ann, in Eighteen Eighty-Seven
In Jamaica, where people come for sun and fun

He turned to the union
For in it, there was a sense of communion
And that set the stage for his activism
Though some would say communism
But not being content, the big man moved on
For there were other lands and people to look upon
So on an ocean vessel, he landed in Costa Rica
Then Panama and other parts of Central America
And on to England before returning to Jamaica
From hence many wondered what Garvey saw
For he was now getting into officialdom’s craw

Meanwhile, the proletariats liked to gather in the street
To hear him speak as if he was offering them red meat
“If you have no confidence in self,
You are twice defeated in the race of life”
You would hear him say
“I trust that you will so live today
As to realize that you are masters of your own destiny
Masters of your fate
If there is anything you want in this world,
It is for you to strike out with confidence
And faith in self and reach for it.”

He knew some would cower
As he sought to build his power
He soon founded the UNIA in 1914
But the best was yet to be seen
Restless in spirit
He was a man without limit
To America, he would go
And his greatness he would show

In the land of opportunity
There was no insecurity

In a system that had blacks at the back
He met the dumb who speaks no evil
He met the blind who sees no evil
He met the deaf who hears no evil
But he didn’t come to waver from his truth
“Africa for Africans at home and abroad”
That was his mantra, and he would not relent
For he believed he was God sent
Mingling with the haves and the have nots
Noting the ways of the racists and the bigots
Knocking heads with the intellectuals
And reading from their playbooks and manuals

He set to work as the Lord is said to have command
By the sweat of your brow, thou shalt eat bread
Separate and build was Garvey’s cry
You can make it if you try
But then he came up against the great
Integrationist W.E. B Du Bois, an intellectual, first-rate
Who described him as a little, fat, black man
Ugly…with a big head,” enough said, no
For Garvey would reply, “a little Dutch, a little French,
A little Negro…a mulatto” a “monstrosity,” he said on the go
A turf war some would later utter
But they didn’t keep it in the gutter
For Garvey would not lose his focus
Or dwell on any hocus-pocus

UNIA branches began to spread like wildfire
The spark of a movement took him higher
Many businesses were launched
And some say he was getting too advanced
Especially with a shipping liner of sort
That garnered him many a snort
But oh no, he did not stop
For he wanted to show
What some thought he could not

But the ‘hataclaps’ came
Mail fraud they claim
Because they wanted
To put his name to shame
There were many to blame
For the game, they play
To see him out of the way

He was deported to Jamaica
For being a troublemaker
But he was soon back in the struggle
Making his way into the political hustle
He again got into trouble
And was sent back to prison
For again, some would argue, a flimsy reason

In January 1940
He suffered a stroke
And by now, he was stone broke
Rumor spread of his death
But he still had his breath
He had a second stroke
That led to his death
And this time, it was true
He died at age 52

After his death, he still held his own
And kept his crown
For at Garvey, death could only frown
Home and abroad
He was large and in charge
For he would be made a National Hero
And his life and death were in every news bureau
With deep mourning and sorrow
Back from England, his bones were returned
To be interred in the National Heroes Park
Where the tombs of heroes have left their mark