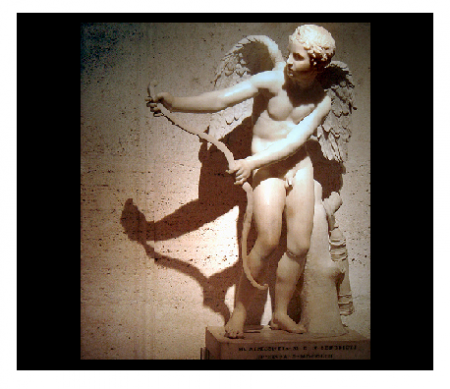 Before it became synonymous with chocolates, flowers and floating naked babies with special arrows, Valentine’s Day was sometimes viewed as a day of tragedy. The real origins of the holiday are shrouded in mystery and defiance possibly going as far back as the third century.

In many of the legends of Saint Valentine, a lonely, heroic priest played an important role. In one incarnation, Valentine, or Valentinus as he was sometimes called, defied Roman Emperor Claudius II’s decree that outlawed marriage for young men. The Emperor thought that single men made better soldiers because they had no wives or families. As a protest the young priest kept performing marriages and was subsequently put to death.

Another story spoke about the rise of Christianity in opposition to the belief in Roman gods. A Christian priest named Valentine was thrown in prison for his beliefs but also for performing the miracle of healing a blind girl, the jailer’s daughter. Before he was executed on February 14, he wrote a note to her and signed it “From Your Valentine.” In another variation of this story, the priest helped Christians escape from Roman prisons and fell in love with the jailer’s daughter, who visited him while he was in jail for the crime. Both of these legends supposedly happened during the third century and by the time the Middle Ages came, the romantic heroism of this figure eclipsed what could been religious martyrdom.

Finally, there is the celebration of Lupercalia. This ancient festival was celebrated between February 13 and 15 to honor the god of fertility, Lupercus and dedicated to Romulus and Remus, who were adopted and raised by a she-wolf as legend has it. As a part of the ritual, an order of Roman priests called the Luperci would sacrifice a goat and a dog, for fertility and purification, respectively. The women would touch the hide of the goat, because it was said to increase their fertility. They would then place their names in an urn and the bachelors would choose their potential mate from the urn. The festival was banned by the Christian church and Pope Gelasius declared February 14 as St. Valentine’s Day.

At this point in history, the legends of the holiday are probably more interesting than the actual truth of it. But the one thing they all have in common is love. Whether it’s love of many people or the love of one in particular, the Valentine’s Day of the present can be seen as the product of whatever lies between the truth and the myth.