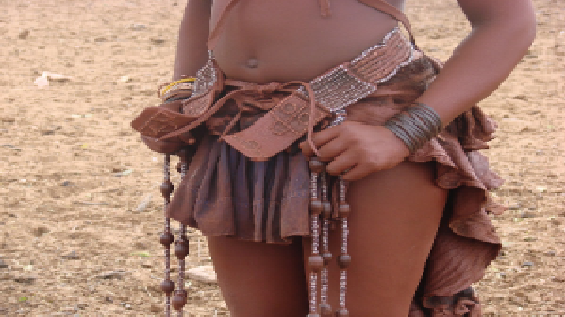 The Himba tribe is an indigenous people with an estimated population of about 50,000 living in northern Namibia, in the Kunene Region and on the other side of the Kunene River in Angola.

The Himba lifestyle is very fascinating, and their clothing and hairstyle are not the typical Hollywood red carpet fashionista look, but notwithstanding, very appealing.

The Himba men and women wear traditional outfits to beat the hot semi-arid heat within their region. For the most part, their outfits consist of simply skirt-like clothing made from calfskins or more recently from modern textiles. Their footwear is mostly sandals made from the rubber of old car tires.

The women rub their bodies with otjize paste — a cosmetic mixture of butterfat and ochre pigment. The paste is used to cleanse the skin over an extended period as well as protect them from the hot and dry climate of the area.

However, it is argued that the women primarily use the otjize paste for cosmetic reasons.

The cosmetic mixture is often perfumed with the aromatic resin of the omuzumba shrub. It gives the Himba women’s skin a distinctive look.

Hairstyle and jewelry play a significant role within the Himba tribe — it indicates age and social status within their community.

The youngest children keep closely shaved heads or a small crop of hair at the top of their heads that is later sculptured to one braided hair plait lowered to the back of the head for young boys.

On the other hand, young girls have two braided hair plaits extended forward towards the face often parallel to their eyes.

Some young girls, with exception, may also have one braided hair plait hung at the front, indicating that they are one of a pair of twins.

From pubescence, boys maintained one braided hair plait while the girls will have many otjize textured hair plaits.

Women who have been married for about a year, or have had a child, wear an ornate headpiece called the Erembe, sculptured from sheepskin, with many streams of braided hair, colored and put in shape with otjize paste.

Unmarried young men continue to wear one braided hair plait extended to the rear of the head, while married men wear a cap or head-wrap and un-braided hair beneath.

Widowed men will remove their cap or head-wrap and expose un-braided hair.