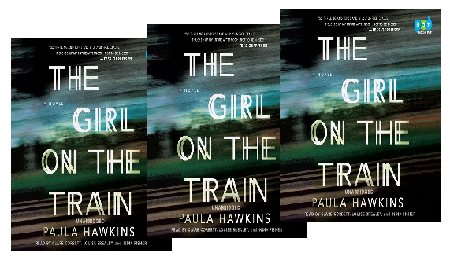 This is a book that one will find it hard pressed to close, once open to read.

It is regarded as one of the top 100 best books to read in the fiction category. It is a thriller and has gotten rave reviews from several different sources including critics from the press.

Some of these are stated accordingly: “The Girl on the Train marries movie noir with novelistic trickery. . . .hang on tight. You’ll be surprised by what horrors lurk around the bend.”—USA Today

“Like its train, the story blasts through the stagnation of these lives in suburban London and the reader cannot help but turn pages. . . . The welcome echoes of Rear Window throughout the story and its propulsive narrative make The Girl on the Train an absorbing read.”—The Boston Globe

“Gone Girl fans will devour this psychological thriller. . . . Hawkins’s debut ends with a twist that no one—least of all its victims—could have seen coming.”—People

Hawkins, the 43-year-old writer, was born in Zimbabwe and later moved to London in 1989.

The book titled, “The Girl on the Train,” is her best-selling novel to date. It took her 6 months writing full-time to complete.

The book demonstrates the writing skills of an author who knows how to take one through not only emotional twists and turns but yearning for more as one waits to exhale.

The novel is a bleak story with themes of domestic violence, alcohol, and drug abuse.

The story is told from the perspectives of three different women, Rachel, Anne, and Megan.

Rachel is a divorced woman who has taken to the bottle for comfort and solace. Her divorce resulted from her husband’s adultery in which he had an affair with another woman who gave birth to a child — Rachel was unable to bear him a child.

Her husband Tom and his new family are happily ensconced in the house that was once Rachel’s — the story goes on!