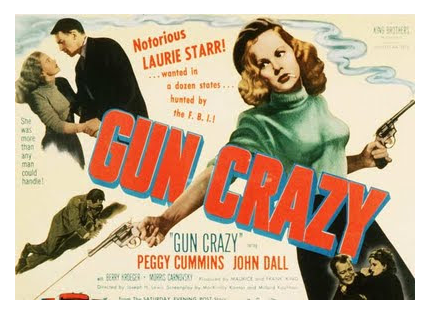 On the Website dallaslibrary2.org, Andrew Anderson portrays an interesting take in his review of the movie, Gun Crazy, a 1950 film noir feature film directed by Joseph H. Lewis and produced by Frank King and Maurice King.

OK, kids, today’s quiz is for hardcore film buffs only:

which of the following is not a characteristic of film noir?

Ha! It’s a trickY question–they all are. Or at least one movie that is sometimes identified with the style of filmmaking known as film noir has all of them

Today’s movie is Gun Crazy (1950), and I’m not the only one who thinks it looks like a lost Hitchcock drama. Actually, now that I think about it, it doesn’t have much in the way of low-key lighting, but there are indeed comical cowboy outfits, if only for a few minutes. If Hitchcock Didn’t Make This, Who Did?

Gun Crazy stars one of the guys from Hitchcock’s Rope (1948), the one who masterminds the idea of killing a friend as a display of moral superiority–John Dall, who only worked in a handful of films. I would say he’s underrated, but in order to be underrated, someone has to rate you, and I’m not aware of that much talk about him one way or the other. He’s great in Gun Crazy, possibly even greater than he is in Rope: he utters some lines like they aren’t even lines. The femme fatale is played by Peggy Cummins, a Welsh actress who could easily have been a Hitchcock blonde.