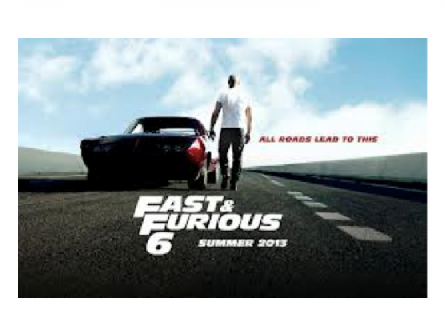 Fast & Furious 6 is a 2013 action film written by Chris Morgan and directed by Justin Lin. It is the sixth installment in the Fast and the Furious film series.

Review from around the Web

“I’m going to get this on Blu-Ray to add to my F&F collection. My Fast & Furious 5 is getting lonely.”

“I always think that they can’t make F&F any bigger or sillier (or more awesome) but they’ve really pulled out the stops for these last three movies. I look forward to number 7, they’re fantastic summer blockbuster movies.”

“This is a perfectly acceptable summer popcorn movie. The explosions, the action, the cars, the fights, and the glib banter sprinkled in between.”
“Furious Six continues on in the same vein as its predecessor, and may just be my favorite of the lot.”

“Ludicrous, but undeniably fun and surprisingly affectionate, this is really all you could ask of a car crash movie, and more.”

‘Fast & Furious 6’ is a deeply romantic movie; in fact the sentiment of love is so great that it transcends categories.

“With Fast and Furious 6, Justin Lin has created the Fast and Furious movie fans never imagined was possible. It’s bigger and more exciting than Fast Five, but dumber than all the previous films combined”
It’s fast, it’s furious, it’s “Fast & Furious 6,” and apparently we love it so much that “Fast & Furious 7” is already queued up in pre-production for a summer 2014 checkered flag.