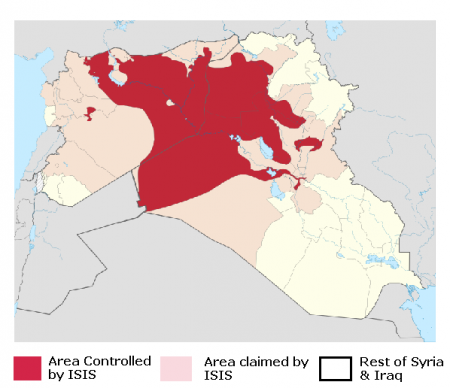 The Islamic State (IS) militant group, also known as Islamic State in Iraq and Syria (ISIS), in its bid to create an Islamic state across the Sunni areas of Iraq and Syria, continues to run rampant in the Middle East by capturing large territories, carrying out public executions, kidnapping and raping women as well as looting oil resources and money from financial institutions.

This has forced the U.S. to act as the militant group ISIS is now viewed as one of the most dangerous Jihadist groups in the world and is also considered a threat to western countries particularly the U.S.

Consequently, President Obama turned to the airwaves earlier this week to communicate his plan for a comprehensive and sustained counter-terrorism strategy to degrade and ultimately destroy the terrorist group (ISIS).

The President said, “I’ve made it clear that those who threaten the United States will find no safe haven.  Thanks to our military and counterterrorism professionals, we took out Osama bin Laden, much of al-Qaeda’s leadership in Afghanistan and Pakistan, and leaders of al-Qaeda affiliates in Yemen and Somalia.  We’ve prevented terrorist attacks, saved American lives and made our homeland more secure. “

He further noted, “Today, the terrorist threat is more diffuse, from al-Qaeda affiliates and other extremists—like ISIL in Syria and Iraq.  As I said this week, our intelligence community has not yet detected specific ISIL plots against our homeland.  But its leaders have repeatedly threatened the United States.  And, if left unchecked, these terrorists could pose a growing threat beyond the Middle East, including to the United States.  So we’re staying vigilant.  And we’re moving ahead with our strategy to degrade and ultimately destroy this terrorist organization.”

The president also reminded the American people that the country cannot afford the mistakes of the past. Consequently, it must act prudently in its strategy to defeat the rebel group.

“We’re moving ahead with our campaign of airstrikes against these terrorists, and we’re prepared to take action against ISIL in Syria as well.  The additional American forces I’ve ordered to Iraq will help Iraqi and Kurdish forces with the training, intelligence and equipment they need to take the fight to these terrorists on the ground.  We’re working with Congress to expand our efforts to train and equip the Syrian opposition.  We’ll continue to strengthen our defenses here at home.  And we’ll keep providing the humanitarian relief to help Iraqi civilians who have been driven from their homes and who remain in extreme danger,” he explained.

The President, however, opened a can of worms by declaring that he will not hesitate to take action against ISIL in Syria as well as Iraq.

“This is a core principle of my presidency: if you threaten America, you will find no safe haven,” he said.

The Syrians, however, have warned that any U.S. airstrikes over Syrian territory could trigger the ‘first sparks of fire’ in the region.

Moreover, the government of Russian President Vladimir Putin – a key ally of Syrian dictator Bashar al-Assad – warned the U.S. that it would be an ‘act of aggression’ and ‘a gross violation of international law.’ in any plan of bombing attack within the Syrian border.