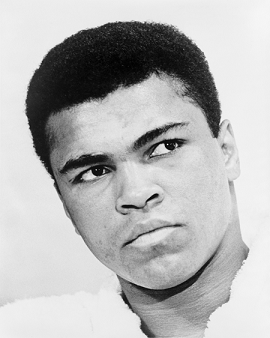 Muhammad Ali was no ordinary athlete, and his invitation to give the commencement speech at Harvard University in 1975 confirms this. The news at the time that Ali would be the main speaker at the 1975 graduating class ceremony caught on like wild fire, and people on campus were in frenzy as they anxiously await the day of his visit.

The air was filled with expectations, interest, and curiosity. It was an occasion where everyone was just waiting to exhale.

Finally, the day came and it was a sold-out Burden Auditorium packed to capacity with a crowd of 1100 people.

Now, Ali was not only a world champion professional boxer but also the greatest, and the most popular man on the planet. By his own rights, he was also a philosopher, poet, politician, theologian, comedian, and a teacher.

Within the spirit of the occasion, Ali waxed lyrical at the start of his speech when he said, “I was told that’s a big honor to be invited to speak in a place like Harvard… I understand that out of people such as you all come presidents, governors, mayors, great doctors, physicians, and scientists. So, I said, well to get something together to talk to these people, it’s got to be pretty heavy.”

Later, the audience erupted in laughter when Ali noted,” I am really humbled and I’m thankful to be here, it’s such a high seat of learning and am just a boxer, when most boxers can’t even talk. You couldn’t invite Joe Frazer, George Foreman…”

Ali’s commencement speech was centered on the spiritual path — the importance of love and cultivation of friendship.

“One learns friendship by being one. If a man extracts in return all he does for a friend then it is business, not true friendship,” he said.

Ali noted that one should pay attention to heart quality, “For the greatness of a man depends on his heart not on his education or wealth.”

He said being selfless was a key lesson to learn in life’s journey.

“I study what you learn in school — common sense,” he said.

His thirty-minute discourse was not only informative, inspiring, and insightful, but also interspersed with jokes, poetry, and lots of laughter.

Coming to the end of his speech, he said, “It’s always a victory to finish a thing in a set time,” hinting at his habit of predicting how he’ll win his fights.

Thereafter, he wrapped up his speech to a tumultuous applause and standing ovation from the audience.