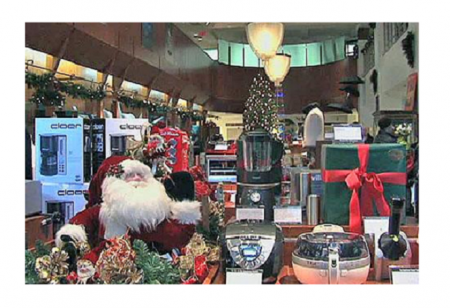 The story started with the three wise men giving gifts to the Baby Jesus in honor of his birth. Ancient Romans exchanged gifts for New Year’s and for Boxing Day, the day after Christmas, the church would open the donation boxes and give money to the poor. Whatever way you look at it, giving gifts has been a part of the holiday for many years. It was considered fun and even gamely. Christmas in the Victorian era was all about parties and games. For example, during what was called a “cobweb party,” each family was assigned a color. In a room laced with colored yarn, they would follow their assigned color yarn to find a present at the end.

Another game had guests gathering around a large bowl of grain holding a spoon. Each would dip the spoon and scoop out a present which was theirs to keep. It was only during the last two hundred years, which coincide with the industrial revolution boom, that Christmas became a public affair instead of just a private one. In the home, people had to buy special kinds of food for their tables and decided to purchase special trees to put up, decorated with special ornaments. This domestic ritual was an opportunity for retail shop owners to give customers what they wanted.

It started off as the basics of food and then grew into little luxuries.  F. W. Woolworth had come up with a brilliant commercial scheme where he imported ornaments from Germany and sold them for a profit. Toys, candles, and other items soon found their way into the markets and the homes of many during the early nineteenth century.  Because as the story went, “the stockings were hung by the chimney with care /in hopes that Saint Nicholas would soon be there.”

As time went on bigger brand stores followed suit and soon gifts and Christmas became synonymous. In addition to being a time when gifts were exchanged with family and friends as a way to wish them well during the holiday season, it was became a status symbol to show off monetary resources. One present became three and then five and the spirit of Christmas was as much about strategic marketing and Black Friday deals.

Has Christmas become more commercialized? In many ways, yes.  But the fact that you are able to share it with family and friends for some is the real gift of Christmas; not everybody has that. So while Christmas has become the season of doorbuster deals and last minute shopping, it’s also a time to remember that it’s how you define it that really makes the difference.