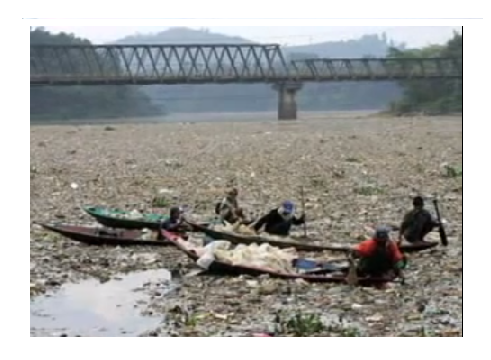 Rivers are flowing bodies of waters and are found in every continent except Antarctica.

They play an important role not only in the lives of people, but also plants, animals, and other species.

The fact is early civilization was built around rivers, and today they continue to play a significant part in the industrial development of countries globally.

Now, the Citarum River, one of the longest and largest river in West Java, Indonesia has a long history and is renown for its contributions to the life of the people of West Java. It supports agriculture, water supply, fishery, electricity, among many other uses.

The rapid growth of factories along the Citarum river banks have made it one of the largest outlet for industrial waste. The situation is further compounded by the more than 10 million people living within the region who use the river as a landfill for garbage and waste.

The river is so strewn with junk that it is difficult to see anything below its surface as it is flooded with plastics, tires, dead animals, human excrements, and other detritus.

Over 60% of the fish species have been wiped out, and the river wild life is completely undermined.

Among the serious threats to people posed by the water pollutants are respiratory irritation, cancer, kidney and liver damage, anemia, and heart failure. It also causes damage to wildlife and stifles plant growth.

In a recent report, tests showed that all the water sources in the area are contaminated with heavy metals and even more alarming the drinking water has mercury at nearly four times the recommended safe level for drinking water.

In addition, more than 60% of the children living in the area suffers from skin rashes.

Although environmental legislation has been enacted since 2009, little has been done since then to enforce these laws and regulations.

Consequently, only a few factories comply with the new legislation while the majority floats the law with impunity.

The fact is by law factories are required to remove dangerous chemicals from their waste water before pumping it into the river.

In 2008, the Asian Development Bank approved a $500 million loan for cleaning up the river; however, there is nothing much to show for this expenditure.

Furthermore, in 2011, a $4 billion cost was estimated and deemed necessary for the river’s revitalization over a 15 year period. However, today, the river remains as dirty as ever and the residents continue to suffer.