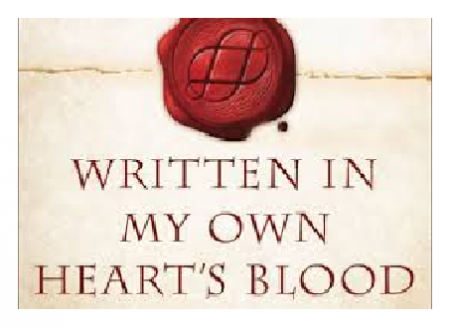 The best romance novel of 2014 according to goodreads.com is the book entitled, Written In My Own Heart’s Blood the eighth novel in the world-famous OUTLANDER series.

In June of 1778, the world turns upside-down. The British army withdraws from Philadelphia, George Washington prepares to move from Valley Forge in pursuit, and Jamie Fraser comes back from the dead to discover that his best friend has married Jamie’s wife. The ninth Earl of Ellesmere discovers to his horror that he is in fact the illegitimate son of the newly-resurrected Jamie Fraser (a rebel _and_ a Scottish criminal!) and Jamie’s nephew Ian Murray discovers that his new-found cousin has an eye for Ian’s Quaker betrothed.

Meanwhile, Claire Fraser deals with an asthmatic duke, Benedict Arnold, and the fear that one of her husbands may have murdered the other. And in the 20th century, Jamie and Claire’s daughter Brianna is thinking that things are probably easier in the 18th century: her son has been kidnapped, her husband has disappeared into the past, and she’s facing a vicious criminal with nothing but a stapler in her hand. Fortunately, her daughter has a miniature cricket bat and her mother’s pragmatism.

The best of historical fiction with a Moebius twist, WRITTEN IN MY OWN HEART’S BLOOD weaves the fibers of a family’s life through the tapestry of historical drama.

“…but Sassenach—I am the true home of your heart, and I know that.”

“He lifted my hands to his mouth and kissed my upturned palms, one and then the other, his breath warm and his beard-stubble soft on my fingers.”

“I have loved others, and I do love many, Sassenach—but you alone hold all my heart, whole in your hands,” he said softly. “And you know that.”

“Thy life’s journey lies along its own path, Ian,” she said, “and I cannot share thy journey—but I can walk beside thee. And I will.”