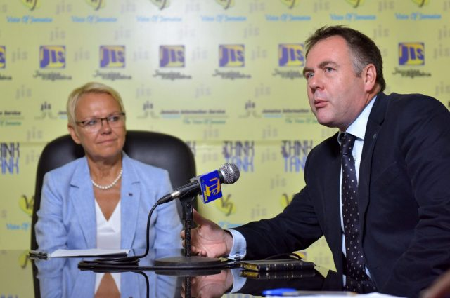 Jamaican tertiary students are being encouraged to apply for European-funded scholarships under the Erasmus Mundus program.

Head of the European Union (EU) Delegation to Jamaica, Ambassador Malgorzata Wasilewska, said it is an opportunity for students to get a better understanding of the diversity and richness of Europe.

She was speaking at a recent Jamaica Information Service (JIS) ‘Think Tank’, at the agency’s head office in Kingston.

Each year, EU-funded scholarships are awarded to the best student candidates applying under annual selection rounds to study in Europe. Since 2007, there have been over 38 Jamaican Erasmus scholars. In 2017, two Jamaicans were successful in gaining scholarships in the following fields – Sports Ethics and Journalism.

“When I arrived here, within the first week I met one of the scholars, who spent six months in my hometown in the north of Poland… so it was quite amazing,” Ambassador Wasilewska said.

The EU’s Political Counsellor, Gavin Tench, said that students at The Mico University College, University of the West Indies, the University of Technology and others “can have a look at where they want to go next. Maybe after their first degrees, they can look about doing a master’s program in Europe”.

“What we allow Jamaican students to do is not just base themselves in one country or in one university. They have the opportunity to do two universities, possibly three and get exposed to not only the education system in both universities but the culture,” he added.