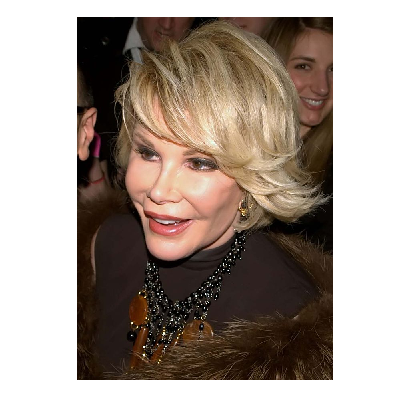 “It is with great sadness that I announce the death of my mother, Joan Rivers. She passed peacefully at 1:17pm surrounded by family and close friends. My son and I would like to thank the doctors, nurses, and staff of Mount Sinai Hospital for the amazing care they provided for my mother.

Cooper and I have found ourselves humbled by the outpouring of love, support, and prayers we have received from around the world. They have been heard and appreciated.

My mother’s greatest joy in life was to make people laugh. Although that is difficult to do right now, I know her final wish would be that we return to laughing soon.”

The public was greeted by the above statement from the daughter of Joan Rivers on Thursday.

Rivers was best known for her stand-up comedy, for co-hosting, the E! Celebrity fashion show Fashion Police, and for starring in the reality series Joan & Melissa: Joan Knows Best?

Today, not only are people shedding tears, but there are also tributes being   paid locally and internationally to the work and life of the American icon.

Tributes from celebrities include:

“It’s unbelievable when you see her work ethic,” Fallon said of the former Tonight Show guest host. “She had a file cabinet full of jokes!” (Rivers was Johnny Carson’s regular guest host from 1983 until 1986, when they had a well-documented falling-out with her mentor. She was banned from the program until February 2014, when she appeared on Fallon’s very first episode as host.)

Fallon got emotional as he remembered how Rivers gave him a kiss during his inaugural episode. “It was really emotional and really nice,” Fallon said. “I don’t want to show a clip, because I don’t think it will do her justice… We loved her. We will definitely miss her.”

“My friend Joan Rivers has passed away once again to quote Billy Crystal… There are no words. Bon Voyage Joan,” the View host tweeted.

The legendary host shared a snap with the funnywoman, writing, “Joan Rivers was a dear and wonderful friend. We will never see her likes again. Rest In Peace, Joan.”

“No one loved life, laughter, and a good time more than Joan,” Walters said in a touching statement to us. “We would have dinner and laugh and gossip and I always left the table smiling. She was a brassy, often outrageous, and hilarious performer who made millions laugh. In private, she was the picture of elegance and class. I will miss her.”

In the meantime, health officials are said to be investigating the clinic and circumstances that led to the death of Rivers.

In the meantime, press reports have stated that the New York City Medical Examiner’s Office is looking at what complications may have caused the 81-year-old comedy legend to stop breathing at an Upper East Side endoscopy clinic last week.

Rivers died Thursday – one week after she went into cardiac arrest during a routine throat procedure at Yorkville Endoscopy on East 92nd Street.

She was placed in a medically induced coma and moved from the intensive care unit at Mount Sinai Hospital on Wednesday where she was later pronounced dead.