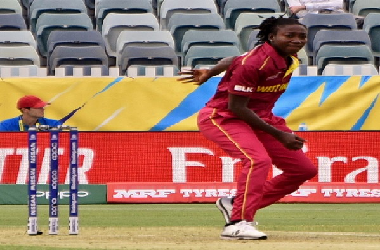 Taylor was named captain in 2015 and made her mark straightaway, most notably leading her side to the 2016 T20 World Cup title and the semi-final of the ODI World Cup in New Zealand earlier this year.

Following the new role assumed by Hayley Matthews, Taylor congratulated her and promised to do her best for the team.

In a recent Instagram post, Taylor said, “I want to say congratulations to Hayley, an amazing player and person that I have watched grow and improve through the years.”

“I know you will do great in this new role. I have enjoyed playing with you and learning from you over the years and look forward to continued teamwork under your leadership,” she added.

Matthews was named as the new West Indies Women captain a week ago.

She was named the Player of the Match in the final against Australia, where she made a 45-ball 66.

Taylor noted the support she had received over the years and was looking forward to not only passing on the torch but also continuing with her support.

“I am grateful for the opportunity I have had to lead this incredible team and all that we have accomplished together. It has been seven years of learning and navigating the uncertainties of the game. I’m thankful for the support I have received from my teammates and the management staff through my tenure as captain who have been encouraging and eager to help in carrying out my duties,” she said.

“I’m looking forward to passing the torch and continuing on and doing my best for the team,” Taylor added.