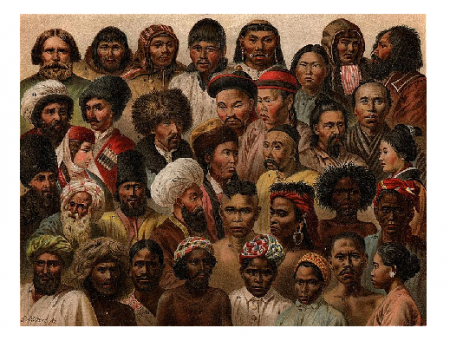 The question of where did the races come from is one posed by people time and again.

Today, the theories proffered in answering the question vary and are viewed from many different perspectives.

The two most widely held and dominant views are taken from either a religious and/or scientific perspective.

Among the many different religious theories is the Tower of Babel — one which implies that people were scattered at the outset of this biblical event (Genesis 11:1—9).

However, this theory does not fit well within the context of some of the most widely scientific research studies conducted on regional differences.

It is argued by some members of the scientific community that human regional differences have come about by the evolutionary processes which took millions of years to occur.

However, recent studies have shown that modern humans appeared not within the time frame previously thought but approximately 100,000 years ago; and only dispersed globally within the last 50,000 years.

This latest view simply means that there is something amiss regarding the explanation of human origins from both the religious and scientific perspectives.

He premised his view on the fact that scientific data indicates that the first humans looked very much like African people groups today.

He further notes that as humans gain exposure to Ultra Violet radiation bodily changes occur and are reflected in skin color, the shape of body and nose.

The fact is the latest scientific data has dispelled the notion that it requires millions of years to manifest regional differences, so it may be argued that there is still a case to be made for the biblical view. Notwithstanding, the bible only makes the claim for one race — the human race (Acts 17:26).

The truth is all human beings are classified as Homo sapiens andthe scientific fact is biologically there is only one race of humans.

Race is said to be a social construct derived mainly from perceptions conditioned by events of recorded history, and has no basis in biological reality.

In a 1998 article in the Journal of Counseling and Development, researchers argued that the term “race” is basically so meaningless that it should be discarded.

However, the fact is, the term will forever be used as it does not only  conveniently puts people into broad categories but also serves as a means to practice racial prejudice against other people throughout the world.