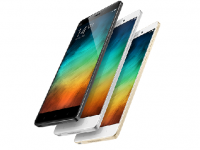 The new smartphone star Xiaomi is ratcheting up the ante by going upmarket and positioning itself against Apple’s iPhone. The Chinese manufacturer, known for ultra-low-priced handsets, on Thursday unveiled a new model that Chairman Jun Lei said is comparable to Apple’s iPhone 6, but thinner, lighter, and much cheaper. The 16-gigabyte phone will cost less than half of an iPhone […]