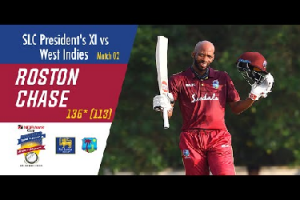 Phot source: YouTube Roston Lamar Chase, the 28-year-old Barbadian and Windies cricketer, has been named the new Vice-Captain for the West Indies Test team to tour New Zealand. Chase, the tall, batting allrounder, won a place in West Indies’ Test team after strong showings with both bat and ball in the 2015-16 Professional Cricket League. He made his Test debut […]