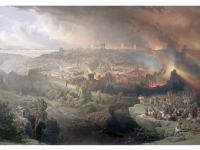 Is Jerusalem The Center Of The Universe?

Jerusalem is known to be not only one of the oldest cities of the world but also a place considered to be the holiest of places by the three  major Abrahamic religions—Judaism, Christianity, and Islam. The city is sited on a plateau in the Judean Mountains between the Mediterranean and the Dead Seas. Both the Israelis and Palestinians claim it […]