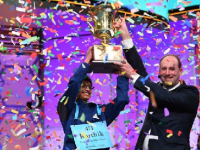 Spelling “Koinonia” Did It For Karthik Nemmani

Although he did not win his regional or county spelling bee competition, Karthik Nemmani made his appearance at the Scripps National Spelling Bee competition counts by taking home the trophy as the champion. The 14-year-old Karthik showed that he was made from sterner stuff than the initial rounds of the competition showed. He proved to be the upsetter when 12-year-old […]