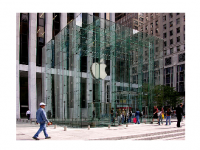 Apple Continues To Rachet Up Sales In Wearables

Following the launch of Apple smartwatch, the tech giant is just a neck behind global leader Fitbit, in the wearable market. According to the International Data Corporation (IDC), Apple shipped a total of 3.6 million units in the second quarter of 2015 (2Q15), just 0.8 million units behind Fitbit’s 4.4 million units. The total shipment volume for the quarter amounted […]