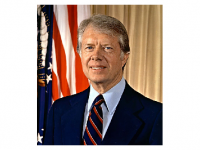 President Jimmy Carter Bats For His Grandson In Election Campaign

90-year-old former President Jimmy Carter was out on the campaign trail on Sunday to support his grandson, Jason, the Democratic nominee for Georgia governor in the 2014 election and a state senator. Carter’s grandson is challenging Republican’s governor, Nathan Deal, in a tight race for the senate seat in the upcoming mid-term election, scheduled to take place early next month. […]