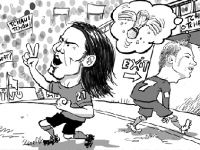 Cristiano Ronaldo could not take his hat-trick prowess into his World Cup game against Uruguay as he did against Spain. It was no mass for the Paraguayan 33-year-old mercurial player as he ran into Uruguay’s football strong-man Edinson Cavani who scored twice to knock out Paraguay’s hope of laying any claims to the 2018 World Cup. Pundits and fans have […]