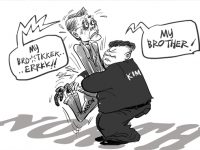 According to press reports, North Korea’s leader Kim Jong-un told his counterpart President Moon Jae-in of South Korea that he would be prepared to abandon his nuclear weapons if the United States would agree to formally end the Korean War and undertake not to invade his country. The reports also noted that Mr. Kim said he would invite experts and […]