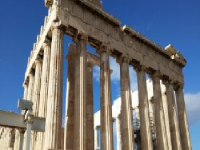 100 Best Things To Do In Greece

Prior to its independence in 1832, Greece was not a common destination for tourists; its popularity began an upward swing in the late 50s, reaching its apex in 2000 (13 million tourists, nearly twice the country’s population). Today tourism is the main Greek industry, with all the social and ecological problems that bring. A poor country whose economy has been […]