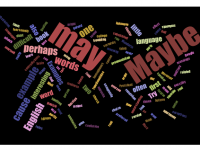 Let Your Maybe Be Perhaps and Your May Be Could Be

It is often said English is one of the most difficult languages to learn, but is it really? Well, if you think it is, try Finnish, Russian, Japanese, and Mandarin. The fact is English has gained the reputation of being fearsomely difficult, partly because of its many contradictions. For example, ‘overlook’ and ‘oversee’ have opposite meanings, while ‘look’ and ‘see’ […]