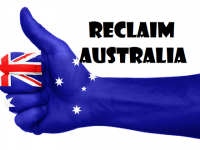 According to press reports, hundreds of Australians took to the streets to  protest against Islamic extremism. The flag waving and placard bearing protestors chanted “Yes Australia. No Sharia” as they rallied throughout the streets. The group dubbed the “Reclaim Australia” attracted hundreds of people to the march but also triggered counter-rallies from other groups who criticized them as racist and […]