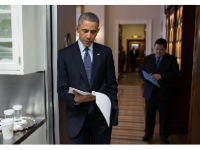 President Obama, in his weekly address to the nation said that the overwhelming majority of people living in the United States have their roots elsewhere. “We’re a nation of immigrants.  It’s a source of our strength and something we all can take pride in,” said the President. He noted that his grandparents’ roots could be traced back to England and Ireland […]