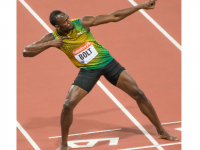 Ladies And Gentlemen Your World Champion…

From Jamaica, Mr. Usain Bolt After stumbling through to the 100m final at the World Championships, Jamaica’s Usain Bolt defended his title in a time of 9.79 seconds at the IAAF World Championships now under way in Beijing, China. Bolt’s title-defending run silenced his doubters and critics as he convincingly forced Gatlin to battle his way to a second-place finish […]