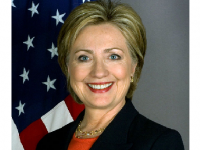 Is Hillary Clinton In Another Spot Of Bother?

In 1884, German statesman Otto Von Bismark uttered the following to members of the German parliament, “Politics is not a science…but an art.” Today, Former Secretary of State Hillary Clinton seems to be missing the art of politics, and the Republicans are circling her like a hawk going for its prey. The fact is the Republicans could not get an […]