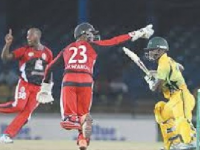 The Jamaica Scorpions was in a no-nonsense mood in their semi-final clash against Trinidad and Tobago Red Force in the WICB regional Super50 tournament played at the Coolidge Cricket Ground in Antigua on Wednesday. It was a total beat down for the men from the twin island Republic who have shown bragging rights in the competition over the years. However, […]