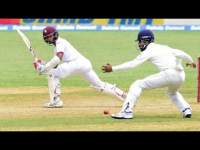 Is This The Coming Of Age Of Shane Dowrich?

The young West Indian wicket-keeper batsman Shane Dowrich before the ongoing series against Sri Lanka had scored 724 runs in 33 test innings at a measly average of 21.93, with only six (6) fifty-plus scores. In the ongoing series, he has so far scored 261 runs at an average of 87, inclusive of one century and two fifties, one of […]