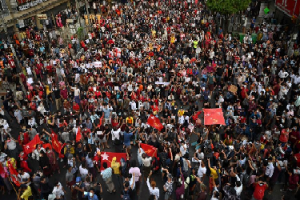 Thousands of people took to the streets in Myanmar to protest the military coup and demanded the release of elected leader Aung San Suu Kyi. “We don’t want military dictatorship. We want democracy,” the crowds chanted in the main city, Yangon. Rallies were held in more than a dozen other cities. Immediately following the coup, there was a blackout of […]