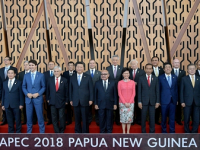 Leaders at the Asia Pacific Economic Cooperation summit could not reach consensus on the wording of a communique after two days of talks in Papua New Guinea, evidenced by heightened tensions fueled by a trade war between the U.S. and China. Canadian Prime Minister Justin Trudeau told reporters that negotiations and agreements posed a problem for the countries involved.  “I […]