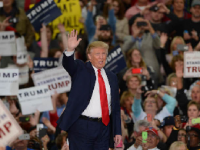 President Trump, in his secondly weekly address, touched on a range of different topics. Five takeaways are highlighted below: 1. The President touted his nomination of Neil Gorsuch for the United States Supreme Court whom he described as one of the most qualified people ever to be nominated for this post.  He noted that Judge Gorsuch is a graduate of Columbia, Harvard, […]