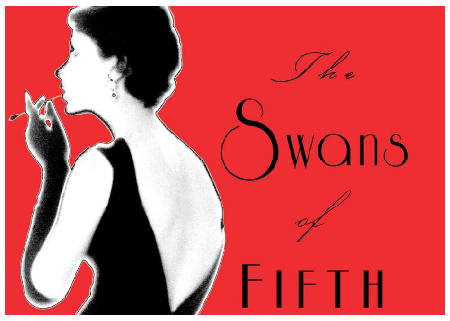 The book titled Swans of Fifth Avenue has received rave reviews from different critics ever since it hit the shelves.

It is written by Melanie Benjamin, The New York Times bestselling author of The Aviator’s Wife.

The following are some of the many reviews:

“…this moving fictionalization brings the whole cast of characters back to vivid life. Gossipy and fun, it’s also a nuanced look at the beauty and cruelty of a rarefied, bygone world.”
—People Magazine

“Elegant Babe’s thoughts, if not her lips, are unsealed at last.”
—Kirkus Reviews

In her review of the book, Catherine Ritchie the Dallas Library Adult Materials Selector writes thus:

It’s a juicy story of the friendship between Truman Capote and socialite Babe Paley. Her friends, known to Truman as ‘the Swans,’ include Slim Keith, C. Z. Guest, Gloria Guinness and Pamela Churchill.

The Swans of Fifth Avenue, brings us glitzy, gaudy, and above all, RICH New York City circa late 1950s through mid-70s: the era of well-clothed socialite women—the “swans”—making names for themselves mainly by virtue of being beautiful, stylish, and seen in all the right places.

Among the brighter lights at this time were Slim Keith, Pamela Churchill, C.Z. Guest, Gloria Guinness and, arguably the queen of them all, Barbara “Babe” Paley, wife of CBS Chief Executive William S. Paley.

Something else the women all had in common was a special friend—the celebrated author Truman Capote, who reveled in (shared) gossip, party-going, and chic-restaurant dining in between writing best-selling books, or at least attempting to do so.

His most profound relationship was with Babe, who historians now consider to have been the one true love of the gay man’s life, although they never became sexual. And the feelings appear to have been mutual, as Babe’s marriage to Paley was basically loveless and scarred by his frequent infidelities.

While Benjamin portrays all her characters vividly, the novel focuses on Babe and Capote, whose devotion seems unshakable, until….