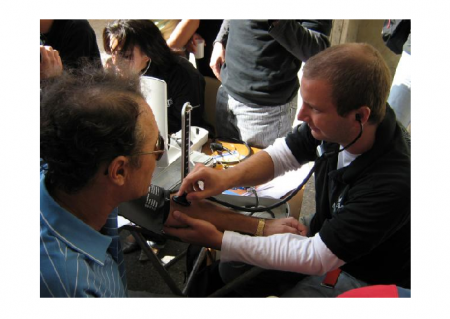 There is an urgent call to action for regular blood pressure checks against new statistics that one in three adults in the America’s suffers from high blood pressure or hypertension, the number one risk factor of cardiovascular disease and death throughout the world, which is believed to affect approximately one billion people worldwide.

The two organizations, both arms of the United Nations, are urging everyone to “know your numbers,” that is, to have one’s blood pressure checked regularly. PAHO/WHO are also urging health providers to check people’s blood pressure at every opportunity, and especially in primary health care settings.

High blood pressure, equal to or above 140/90 mmHg, increases one’s risk of heart attack, stroke, and kidney disease. Studies show that high blood pressure contributes to nearly 9.4 million cardiovascular deaths each year around the world. In the Americas, cardiovascular disease claims 1.9 million lives each year and is the main cause of death in most of the region’s countries.

“Making sure people know their numbers is a personal responsibility, but it’s also a professional responsibility for doctors, nurses and other healthcare workers,” said PAHO Director Carissa F. Etienne. “The good news is that hypertension is both preventable and treatable. In some countries, prevention and treatment of high blood pressure and other risk factors have significantly reduced deaths from heart attack and stroke.”

Although high blood pressure affects some 30 percent of the adult population, a third of them do not know they have the condition. Hypertension often has no symptoms, which means adults need to take every opportunity to get their blood pressure checked. The health risks of hypertension are even higher for people who also smoke, are obese or have diabetes.

Hypertension can be prevented by:

For those who have high blood pressure, controlling it is the key. Recent studies in Latin America show that control rates for hypertension are generally low, ranging from 12 percent to 41 percent. By comparison, Canada, Cuba, and the United States have control rates of more than 50 percent.

“In addition to prevention initiatives that many countries in the Americas have developed, it’s also important that health providers ensure early detection and treatment of hypertension,” said Pedro Orduñez, PAHO advisor on noncommunicable diseases. “People who are diagnosed with hypertension can be treated and controlled over the long term, significantly improving their chances of leading a long, healthy and productive life.”

One of the most important contributors to hypertension is overconsumption of salt. “On average, we consume twice the amount of salt today that we need,” said Orduñez. “So reducing salt consumption is one of the key interventions to reduce hypertension. Being physically active and eating healthy foods is also key.”

Consuming less salt is not only a matter of individual behavior, however. “Most dietary salt today is from processed foods, and that is precisely where we should focus more efforts — on the food industry,” said Orduñez. “But in addition, governments and all of society — all of us can do something to reduce the risk of high blood pressure.”

Last year, health authorities from throughout the Americas approved a strategy for prevention and control of noncommunicable diseases that has the goal of reducing deaths from cardiovascular disease, cancer, diabetes and chronic respiratory diseases by 25% by the year 2025. Reaching this goal would save an estimated 3 million lives in the hemisphere.

In signing onto the strategy, PAHO member countries pledged to prioritize noncommunicable diseases in their health and development policies, promote multisector dialogue and partnerships, and strengthen measures to reduce risk factors and improve health care coverage.

World Health Day is celebrated every year on April 7 to commemorate the anniversary of the founding of WHO in 1948. Each year’s campaign focuses on an issue of priority concern for global health.