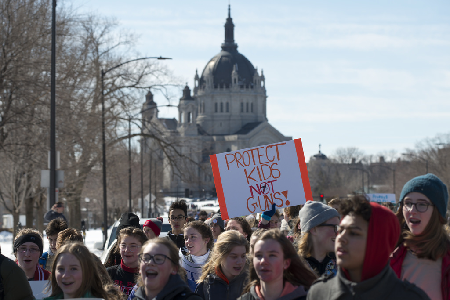 Thousands of students gathered along Pennsylvania Avenue, with placards reading “Protect kids not guns” and “Am I next?.”

Students took to the streets of Washington and cities across the United States demanding stricter gun control law.

The students’ protest was prompted after a mass shooting at a high school in southeastern Florida where 17 people were killed including students and teachers.

The numbers were said to be like those seen in protests during the Vietnam era, about 50 years ago.

“If you listen real close, you can hear the people in power shaking,” Parkland survivor David Hogg said to roars from the protesters packing Pennsylvania Avenue from the stage near the Capitol many blocks toward the White House.

“We’re going to take this to every election, to every state and every city. We’re going to make sure the best people get in our elections to run, not as politicians but as Americans. “Because this,” he said, pointing behind him to the Capitol dome, “this is not cutting it.”

Joining the protestors were singers Ariana Grande, Miley Cyrus and Lin-Manuel Miranda, the man behind hit musical Hamilton, also made their voices heard on a stage erected in front of the U.S. Capitol building.