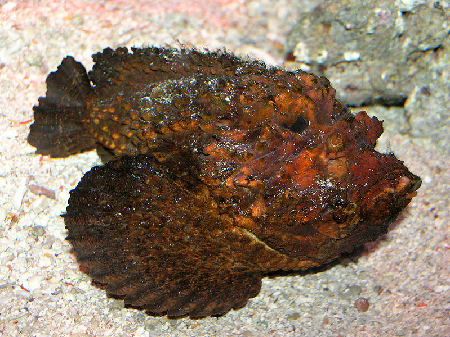 In the Ian Fleming short story “The Hildebrand Rarity”, the Seychelles Islander Fidele Barbey asks James Bond, “Ever seen a man that’s stepped on a stonefish? His body bends backward like a bow with the pain. Sometimes it’s so frightful his eyes literally fall out of their sockets. They very seldom live.”

Ahhh, such is the danger of the stonefish that lies in the ocean shadows and coral reef. One false move or step could mean death within an hour.

Stonefish is covered with needle-sharp spines filled with deadly poison and is said to be one of the most venomous fishes known.

Stonefish is found in large quantities within the Indo-Pacific regions in countries such as the Philippines, Indonesia, Australia, Japan, and China.

Although some species are found in rivers, they are primarily a marine fish.

The stonefish derives its name from its ability to camouflage itself with a grey and mottled color like the color of a stone.

They may not be easily detected, and one may inadvertently step on them, triggering a sting.

When the stonefish is disturbed, it may inject an amount of venom proportional to the amount of pressure applied to it.

The two most recommended treatments include the application of heat to the affected area and antivenom.

Notwithstanding, its fearsome reputation, stonefish is edible to humans if prepared properly as the protein-based venom quickly breaks down when heated, while raw stonefish served as part of sushi is rendered harmless simply by removing the dorsal fins, which are the main source of venom.

The fish is considered a delicacy in many parts of Asia, including south Japan, south Fujian and Guangdong in China, and Hong Kong.

In the Hokkien-speaking area, stonefish is considered a delicacy and good for health.

Stonefish meat is white, dense and sweet, and the skin is also edible. They are usually cooked with ginger into a clear soup and sometimes served raw as sushi or sashimi.

Stonefish is highly sought after by food connoisseur which rings true to the saying, eat your poison, dear!