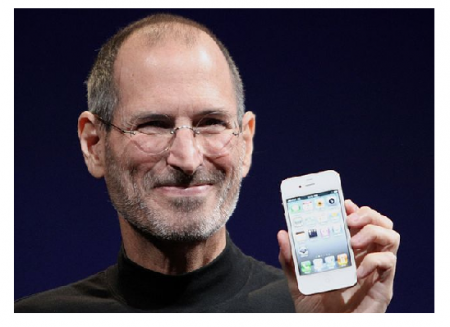 Steve Jobs was not only a guru and a technical genius, but also his marketing skill was brilliant and matchless. “We’re here to put a dent in the universe. Otherwise why else even be here?” he wont to ask time and again. The fact is Jobs’ presentations were always a class act and one would do well to revisit and learn from them. In an article by the BusinessWeek some time ago, it listed 5 lessons one could take away from Jobs’ presentation style.

There should be some degree of foreplay to one’s presentation. After all, one doesn’t readily jump into the sack on a first date. Jobs’ style was always to lay out a plot at the introductory stage of his presentation and in so doing he titivates and teases his audience about changes occurring in the field of technology and his quest to introduce products that will get people to not only think big but also act big. This is Jobs at his tantalizing best, “Today, we are introducing three revolutionary products. The first is a wide-screen iPod with touch controls. The second is a revolutionary new mobile phone. And the third is a breakthrough Internet communications device.” He would frequently repeat the three devices then says, “Are you getting it? These are not three separate devices. This is one device…today Apple is going to reinvent the phone!” At this point, his audience would be in frenzy and the applause, rapturous. So, he builds suspense and then allows for a crescendo in excitement.

Stick To One Theme Per Slide

Add Pizzazz To Your Delivery

Adding pizzazz to one’s presentation will not only relieve boredom but also promotes interest and enthusiasm. Therefore, one’s delivery should be compelling and exciting. This is where proper phrasing, inflection, and information become important. The fact is a boring monotonous tone will not cut it. Jobs in his presentation always changed his pitch in delivery. He raised and lowered his voice in a timely manner at different points in his delivery.

The old saying, “Practice makes perfect” holds true in any form of presentation. One just doesn’t show up and make an effective presentation. There is no short cut; one has to rehearse until one nails it. Steve Jobs being the perfectionist that he was known to have spent hours rehearsing before any product launch presentation.

Be Honest and Show Enthusiasm

There nothing more convincing than believing in what you are saying with passion, confidence, and enthusiasm. In addition, being truthful and honest will always gain the trust of an attentive audience. Jobs had no qualms about touting his products because he believed that they were far superior to any other product in its category on the market.