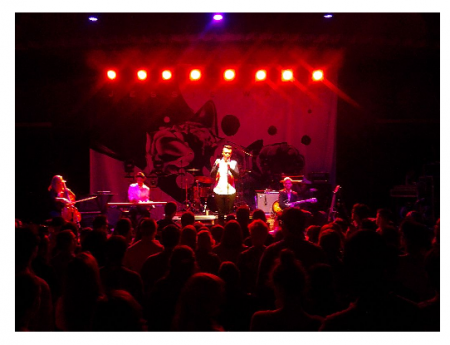 Sam Smith, the 22-year-old British crooner is not only making the music charts his own, but also fans can’t get enough of him.

The soulful songwriter and singer however, has found himself in a spot of bother recently as his hit song titled, “Stay With Me” is deemed a copyright infringement.

The dispute stems from the fact that Smith’s song comes close to Tom Petty and Electric Light Orchestra’s Jeff Lynne’s 1989 hit song, “I Won’t Back Down.”

“Recently the publishers for the song ‘I Won’t Back Down,’ written by Tom Petty and Jeff Lynne, contacted the publishers for ‘Stay With Me,’ written by Sam Smith, James Napier and William Phillips, about similarities heard in the melodies of the choruses of the two compositions,” Smith’s rep told Rolling Stone. “Not previously familiar with the 1989 Petty/Lynne song, the writers of ‘Stay with Me’ listened to ‘I Won’t Back Down’ and acknowledged the similarity.”

Smith’s rep added, “Although the likeness was a complete coincidence, all involved came to an immediate and amicable agreement in which Tom Petty and Jeff Lynne are now credited as co-writers of ‘Stay With Me’ along with Sam Smith, James Napier and William Phillips.”

That said, Petty and Lynne will not be eligible to share in the Grammy, should Smith win for the song.

“Since Lynne and Petty did not do any new writing for this work, we are considering their original work to have been interpolated by Napier, Phillips and Smith for ‘Stay With Me,'” Senior Vice President of Awards Bill Freimuth reportedly told the Wall Street Journal.

“Lynne and Petty will not be considered nominees nor will they be considered GRAMMY recipients, should the song win. Rather, they would be given certificates to honor their participation in the work, just as any other writers of sampled or interpolated work.

According to The Sun, Smith and Petty actually settled out of court back in October, but details have only emerged recently. The settlement reportedly included a 12.5% writing credit to both Petty and singer-composer Jeff Lynne (of ELO fame). The song’s credit on ASCAP — that’s the American Society of Composers, Authors, and Publishers — now lists Smith, Petty, Lynne, and Jimmy Napes as the chief songwriters.