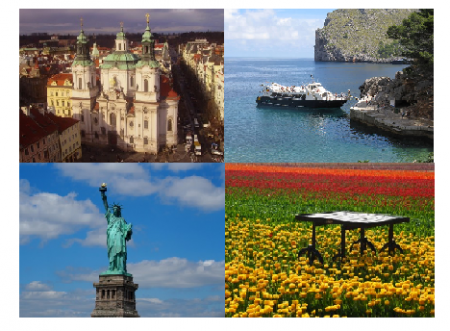 “Isn’t it sad to go to your grave without ever wondering why you were born? Who, with such a thought, would not spring from bed, eager to resume discovering the world and rejoicing to be part of it?” – Richard Dawkins

There is something magical about spring – it transforms, rejuvinates, reenergizes, as well as brings about a vibrant  and dynamic change to a lifeless landscape. It’s the season of rebirth. There is no doubt that many people will be vying for changes in their lives as the new year pushes on and especially as the season of spring begins. So, here’s a wish list of some top destinations that if visited, could bring about a transformation for some people this season.

This is the capital and largest city of the Czech Republic, as well as the fourth-largest city in the European Union. It is the historical capital of Bohemia. It boasts a number of famous cultural attractions, many of which survived the war and violence of 20th century Europe. Some of its famous attractions include the Prague Castle, the Charles Bridge, Old Town Square, the Jewish Quarter, the Lennon Wall and Petřín hill. There are also museums, cinemas, galleries, theaters among many other historical exhibits and attractions. Apart from the blossom from flowering magnolia trees during the springtime season, there are also lots of cultural and seasonal events such as Prague Spring Music Festival, Bohemian Carnival, Easter markets displaying a wide range of handcrafted goods and traditional foods, the Prague Festival of Czech Beer and Prague’s Night of Churches.

Spring in New York is like no other time. The weather is much warmer and there are numerous activities to engage in. Some of these include: St. Patrick’s Day Parade – March 17 The Tribeca Film Festival – April 16 -27 The Ringling Bros. and Barnum & Bailey Circus – extraordinary animal performances, captivating clown escapades and daring high wire acts Brooklyn Botanic Gardens – New York’s version of a Sakura festival (cherry blossom) Metropolitan Museum of Art Exhibition Central Park – a place to watch nature manifest itself in glory at springtime

Negril is a small village beach resort town in Jamaica with a population of about 3000 people. It is located at the westernmost part of the island. The resort town of Negril has some of the most beautiful coastline in the world. It is home to seven miles of pristine sand beaches, crystal clear waters and dramatic rugged cliffs. The crystal clear water is perfect for taking a dip in the warm Caribbean Sea, or just to take time off to laze away on the beautiful golden sand for sunbathing. Moreover, it provides a perfect setting to take in a kaleidoscopic sunset from the comfort of a beachfront bar. The locals have dubbed the town the “Capital of Causal” for its laid-back and informal island vibe. The party never stops at Negril, and one can dance all night until daylight.

This is an island located in the Mediterranean Sea. It is the largest island in the Balearic Islands archipelago, in Spain. It is the destination of choice for tourists from Germany, Ireland, Poland as well as other European countries. The subtropical weather makes it perfect for a number of different activities. These include: Trips to fluorescent flower-laden fields Rock climbing, wake boarding, and horse riding A range of top-class restaurants Hiking and hill walking for viewing of the stunning and varied countryside Medieval festival celebrations World class beaches Theatrical events and entertainment

Everything comes to life in Holland after a generally long autumn and winter. A vast network of kaleidoscopic color of tulip fields come alive at this time of the year and the sprawl of various color can be seen as far as the naked eye can see. Thousands of tourists flock to see these spectacular quilted farmlands each spring. More than three billion tulips are grown each year with a major portion exported to the U.S. and Germany. Apart from the tulip spectacular, Holland offers many events during the spring season. Some of these activities includes include festivals, flower parades, cheese markets, water sports, and exhibitions.