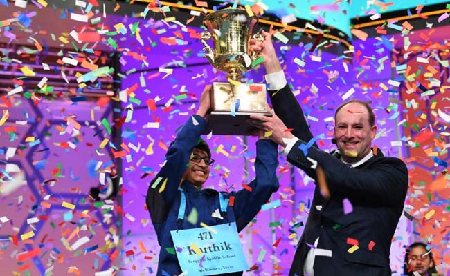 Although he did not win his regional or county spelling bee competition, Karthik Nemmani made his appearance at the Scripps National Spelling Bee competition counts by taking home the trophy as the champion.

The 14-year-old Karthik showed that he was made from sterner stuff than the initial rounds of the competition showed.

He proved to be the upsetter when 12-year-old Naysa Modi, his rival, misspelled the word “Bewusstseinslage” in the first championship round.

Karthik had to spell two words correctly to walk away with the title. This he did with calm and composure by spelling correctly the final word, “koinonia” — Christian fellowship or communion.

Karthik hails from McKinney, Texas, and his arch-rival Naysa lives in Frisco, Texas — both suburbs of Dallas. Naysa topped Karthik at their county bee level but was no match for him at the national level.

.”She’s a really, really good speller. She deserved the trophy as much as I did,” Karthik said. “I got lucky.”

Karthik got his pick to participate at the national level through a wild-card program that was instituted this year by Scripps.

He is the 14th consecutive Indian-American champion and 19 of the past 23 winners who have had Indian heritage. In addition to the trophy, he gets more than $40,000 in cash and prizes.