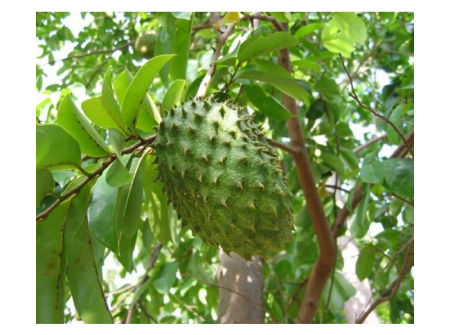 Annona muricata, commonly known as the sour sop or graviola fruit, is a plant native to Africa, Asia, South America and the Caribbean. It’s a green fruit with a spiny exterior and a soft white sweet/tart fleshy interior. It’s used to make ice cream and beverages. It’s normally prepared as a nectar of water, pulp, and sweetener, such as condensed milk or honey and special care is taken not to ingest the seeds which are considered toxic to humans. In addition to being a delicious food, it has serious health benefits, including antitumor activity.

There have been numerous studies implying the fruit’s effectiveness against cancer, but it wasn’t until 2011 that a study showed that the graviola fruit extract inhibited tumor growth, specifically in the cases of breast cancer and even liver cancer; it was especially effective against the types of cancer that were resistant to chemotherapy drugs. Research showed that annonacin, a chemical found in sour sop, not only worked against tumors, it also had antimalarial, antiviral, antimicrobial properties as well. There have even been successful applications as a treatment for oral herpes, HSV-1.

So with all of these positive research studies and news, why are some researchers cautious? It turns out that doctors have found that the same compound that is responsible for the all the great health benefits is also a potential neurotoxin. Some studies have found that ingesting large amounts of graviola can cause nerve damage and cause problems with movement. Some of the substances in the fruit can cross the blood/brain barrier and create changes in the body that are similar to those experienced by patients with Parkinson’s disease. It may also induce hallucinations. While it’s unlikely that eating the fruit as part of a normal diet would cause these types of issues, the fact is a lot of nutraceutical companies are pushing graviola capsules. These supplements may have highly concentrated amounts of graviola extract and some patients may be taking as many as 100 capsules within two weeks.

Studies show that sour sop has a lot of medicinal and pharmaceutical potential, but more research needs to be done to understand dosages and side effects.  More importantly, it should not be taken as an alternative to regular cancer treatment. In the meantime, you can get our hands on the fruit pulp, which is sold online and enjoy; let the medical research portion sort itself out.