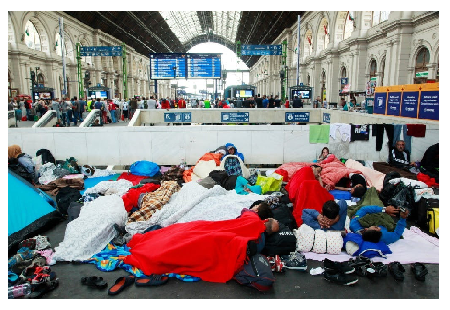 You see men sailing on their ego trip,

Blast off on their spaceship,

Today, millions of migrants are fleeingthe bloodletting, political strife, and persecution in their home countries such as Afghanistan, Syria, Iraq, Libya, and Eritrea.

These migrants are now pouring into Europe and in Germany in particular.

The United Nations’ refugee agency, UNHCR, estimates that 366,402 refugees and migrants have crossed the Mediterranean Sea to Europe this year, with 2,800 dead or missing.

The arduous journey that the refugees endure to make it to Europe and the appalling and squalid conditions under which they live once reached are heart breaking.

This situation has now become a human catastrophe, and there seems to be no end in sight as world leaders seem to be at their wits end on how to arrest the problem.

Given the crisis, the head of the Catholic Church, Pope Francis, has been prompted to act by imploring Catholic institutions throughout Europe to show mercy to the flood of refugees arriving on their shores by offering them shelter.

The fact is what is happening in these war torn countries is heartrending and one cannot help but bow one’s head in shame at man’s inhumanity to man.

At the same time, as one clamor for the acceptance of these refugees, let’s not forget the Haitian refugee crisis a few years ago. There was no appeal for the U.S. to accept 65,000 Haitians as is being done now for Syrians fleeing the Middle East.

In fact, in the Haitians’ darkest hours they were never viewed by U.S. as political refugees even though Amnesty International recommended that theybe treated as such.

The truth is the Haitians who sought to escape the nightmare of their country in small, rickety, and leaky boats were sent back to their country post haste by the U.S.

Unlike the cry for mama Merkel in Germany by refugees, we are yet to hear Obama’s name whispered.

The oil rich golf states also seem to be missing in action in reaching out to the refugees.

Moreover, religion has apparently taken a back seat and become secondary in the midst of this crisis.

This is in fact rather sobering and the cry of death to Europe and America may one day, hopefully, become long live Europe!  Long live America!